Enjoy the well kept country life with a breath of count’s tradition at the „Gräflicher Landsitz Hardenberg“
one of the most beautiful destinations in the heart of Germany.

There is so much to experience here, come and see for yourself!

We are looking forward to your visit!

Hardenberg is home to the legendary spirits with the boar head.

Hardenberg is home to the legendary spirits with the boar head. Our corn distillery “Gräflich von Hardenberg’sche Kornbrennerei”, where the noble spirits are distilled to this day, is located here. But the corn distillery is just one of many attractions pooled under the umbrella brand “Gräflicher Landsitz Hardenberg“ in the so-called “Hardenberg KeilerLand (boar land)”.

The animating spirit behind the overall concept is Carl Graf von Hardenberg, who manages the enterprise in the ninth generation. His mission is to link a tradition of more than 300 years to a sustainable vision of the future. The aim of the dynamic entrepreneur is to continuously develop new ideas for Hardenberg’s future as a destination for guests and visitors. 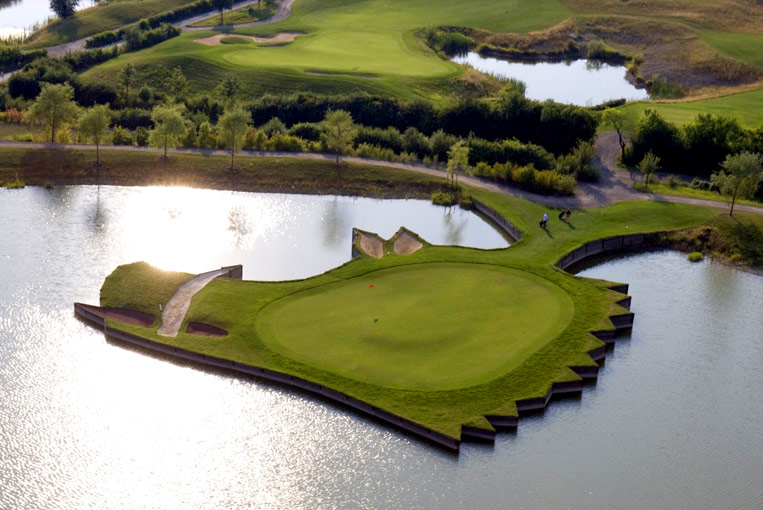 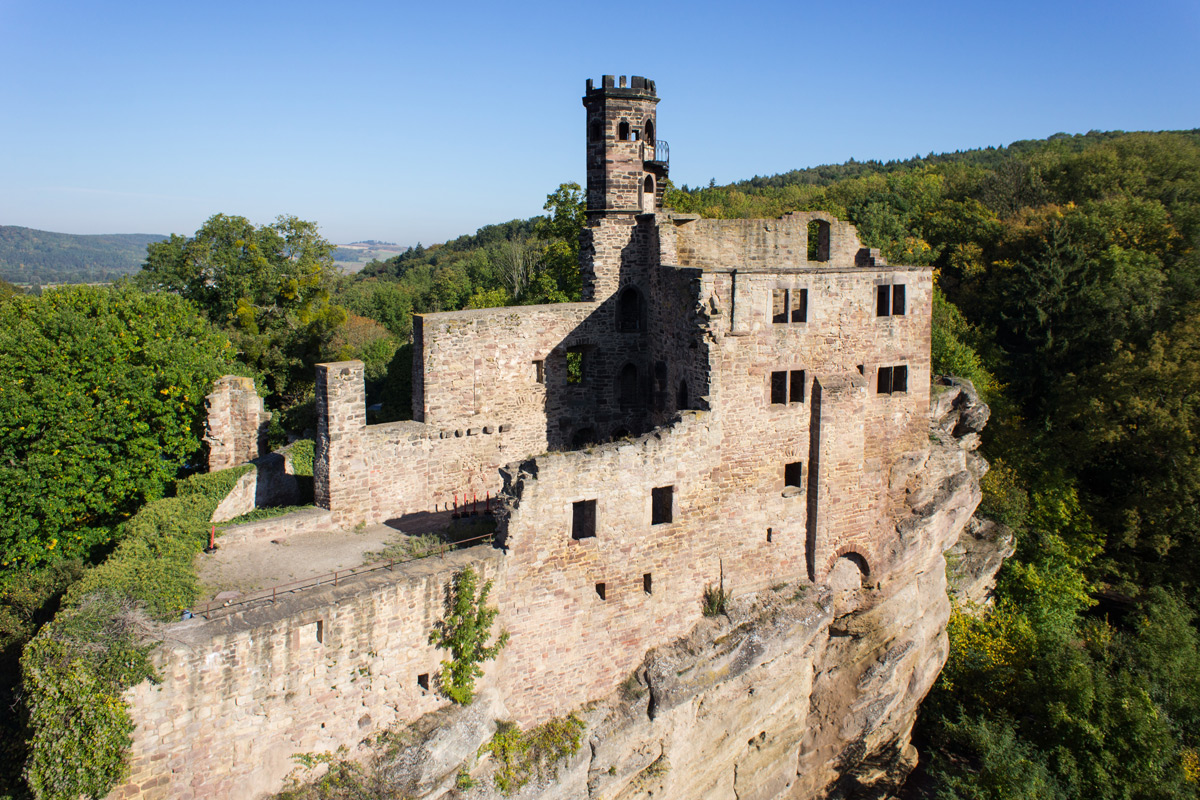 The castle of the House von Hardenberg, now towering over the land in ruins, is more than a thousand years old. It is also the setting of the legend about the heraldic animal of the von Hardenberg family. It is said to have been a boar that one night in the middle of the 13th century alerted an attempted attack on the castle. It grunted loud enough for the residents of the castle to wake up. Since this incident, the boar head adorns the family’s coat of arms.

During a visit to the Hardenberg BurgRuine you can experience history at first hand. It is also here, in the lovingly restored vault, where you can find a branch of the registry office Nörten-Hardenberg, which guarantees a romantic wedding ceremony in a historical setting. It is also possible to get married in the orphanage chapel in Nörten-Hardenberg.

The famous spirits with the boar’s head on them originate from the Gräflich von Hardenberg’sche Kornbrennerei. Our guided tours make the production processes come alive: Visitors come to know, for example, what a Rohbranntkolonne is, and how gold ends up in the famous Danziger Goldwasser, all in a playful and active way.

In the Hardenberg KeilerLaden you can find our original Hardenberg spirits and liqueurs as well as a wide range of attractive gifts and accessories.

In the Hardenberg Atrium, in the Altes ZollLager you can learn more about one of the most important ancestors of the von Hardenberg family: The permanent exhibition „Revolution von oben“ displays images and text panels related to the life and work of Karl August Fürst von Hardenberg.

If you like the rustic style, you will love the Hardenberg KeilerSchänke, the parlor of Hardenberg. Hearty cuisine, a selection of fresh salads, regional products and savory dishes are offered here. We especially recommend the game dishes, hunted in our own woods. During the summer months, you are warmly welcome to enjoy your meal in the beer garden in the inner courtyard of the Gräflich von Hardenberg’sche Kornbrennerei. 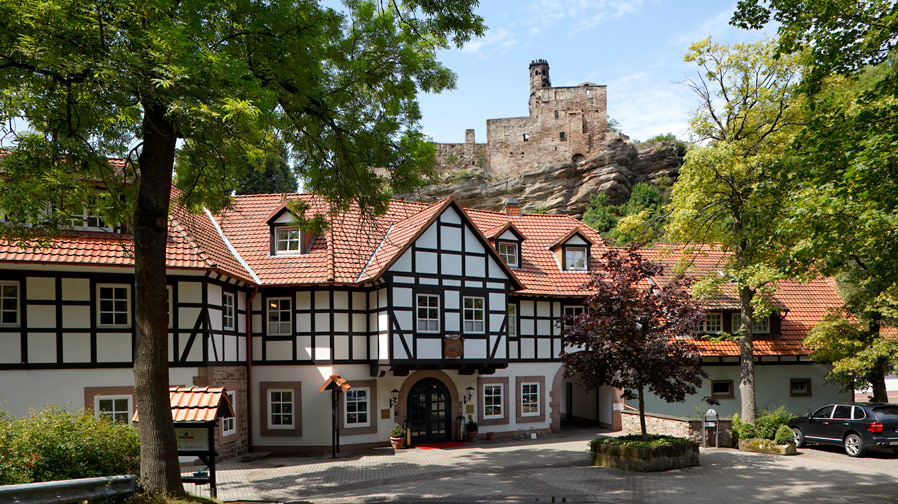 Aficionados will enjoy the Hardenberg BurgHotel, a 5* Relais & Châteaux hotel with 42 rooms and suites. In the associated gourmet restaurant Novalis, head chef Katja Burgwinkel combines classical french and regional cuisine with Mediterranean levity. Novalis was awarded 2 1/2 F in FEINSCHMECKER Guide as well as 15 points and two toques in Gault Millau Germany 2014 for its creative cuisine. One of the restaurant’s focuses is on game hunted on our own land. During the summer months you can sit outside on our idyllic terrace right below the castle ruins of Hardenberg.

The quietly situated 4* Hotel FREIgeist is the perfect place for work and relaxation amidst beautiful nature. The house’s interior combines modern and timeless elements and with its spacious banquet and meeting area and its 62 rooms addresses convention guests, leisure travelers and golfers alike. During summer, the terrace with its adjoining pond invites you to relax and enjoy a refreshment outside. 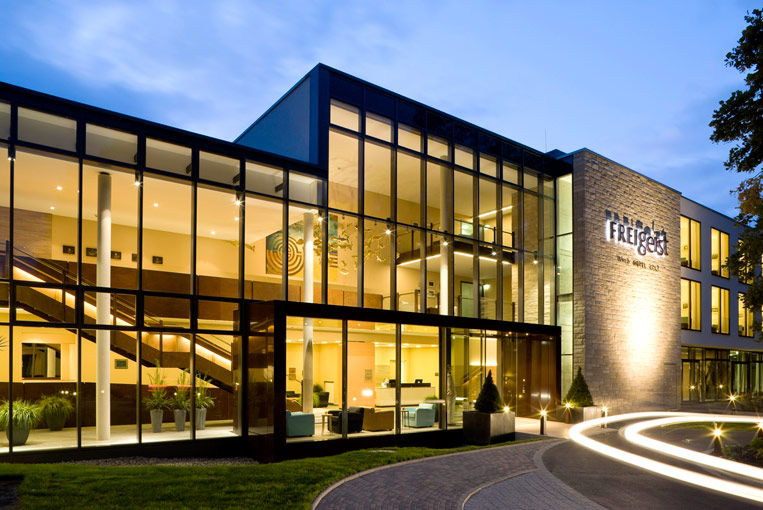 The origins of Hardenberg castle date back to the 10th century. It was built by the Archbishop of Mainz and solely served the purpose of defending his property and protecting the population.

Bernhardes de Thutigehusen is the first “Hardenberg mentioned in a document“ in 1139, later also the name de Novali emerges. The castle hill gets mentioned already very early as Hartisburg, Hardenberch or Hardinberg (“harden“ = forest“). The family name “von Hardenberg” is used after 1219.

The relationship between Hardenberg and the neighboring Castle Plesse is characterized by recurring tensions, and countless stories have arisen from this feud. One of them is the so-called “boar legend”: The knights of Plesse are once again trying to conquer Hardenberg castle, and they have already made it to the southern slope of the mountain, where, however, they startle a boar. The boar is not exactly pleased about this and starts to make a huge fuss. It is only due to the boar’s noise that the knights of Hardenberg become aware of the aggressors and are able to ward them off. Up to this day, the heraldic icon of the Hardenberg family had been a key, but henceforth the boars head becomes the main icon of their coat of arms.

Levershausen, the current location of Hardenberg GolfResort, is mentioned for the first time in an official document of the counts of Hardenberg as a so-called “outlying estate”.

The Diocese of Mainz transfers the castle and all associated land to its managers, the counts of Hardenberg, to raise funds for activities of the Catholic Church abroad.

The family splits up to two different lines and another castle, the “front house” is built. Villages and sections of land and forest are divided, and a partition treaty is signed. This contract also states that only male successors are entitled to inheritance.

The first “rear house line” ceases in 1669, and the “front house line” splits up once again. The split still manifests in the addresses.

According to the diary of the family’s private tutor, large parts of the castle collapse in an earthquake-like thunderstorm. The family temporarily moves to their townhouse in Göttingen and they begin to build a representative house at the foot of the abandoned castle ruins.

The castle at the foot of the old castle ruins, in which the counts of Hardenberg still live by today, is completed. During the following years, the large farmyard with all its buildings, which today presents itself to its visitors as Gräflicher Landsitz Hardenberg, arises on the premises.

The first 10 rooms of today’s 5* Relais & Châteaux Hardenberg BurgHotel are established. The bourgeois castle tavern turns into a gourmet restaurant over the years, and since 1994 bears the name “Novalis“.

A registry office branch is established in the old vault of the castle ruins. The impressive sandstone walls, a 250-year old refectory table and oak chairs with an embedded boar crest are historical witnesses to today’s brides and grooms wedding vows.

The 4* LIFESTYLE Hotel FREIgeist, formerly Waldhotel Gesundbrunnen, has been part of Gräflicher Landsitz Hardenberg since 2007. In the course of acquisition, the hotel is completely renovated and expanded to 62 rooms. It is re-opened in 2008. 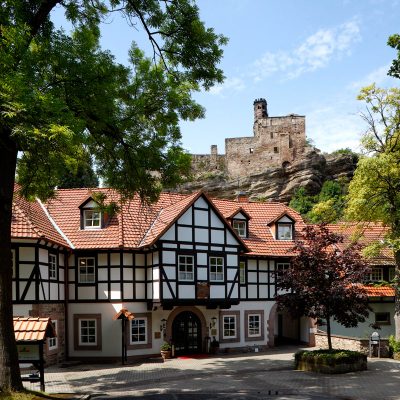 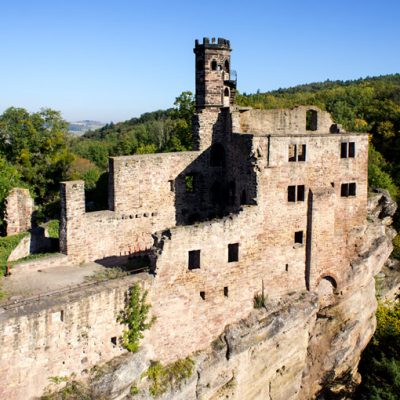 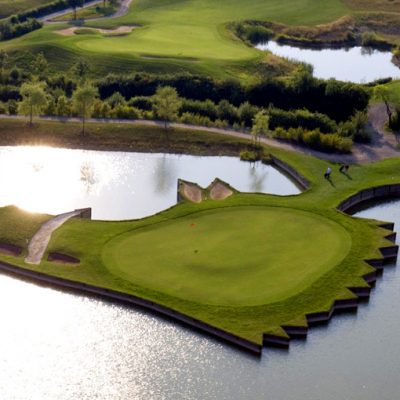 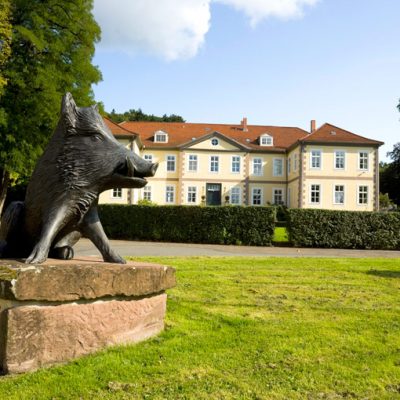 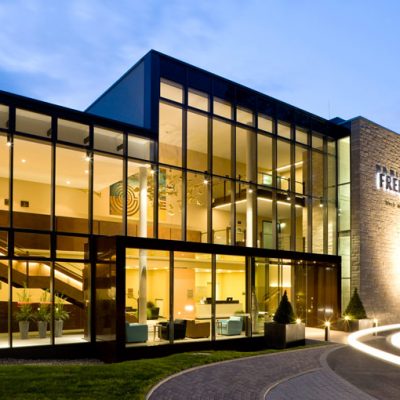 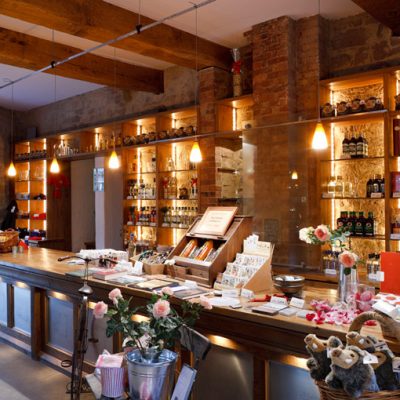 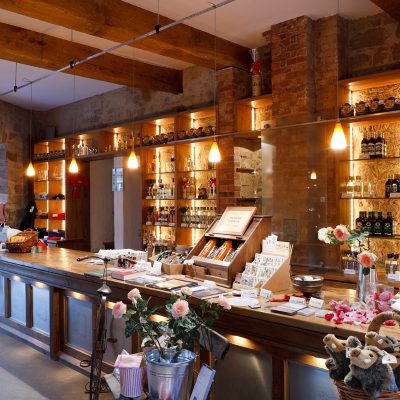 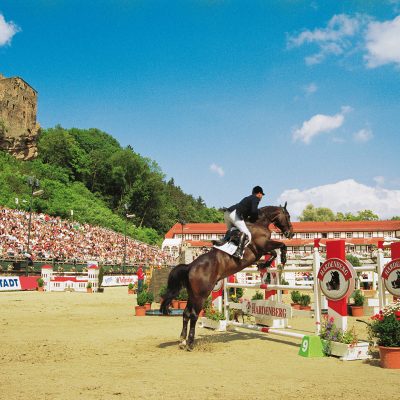 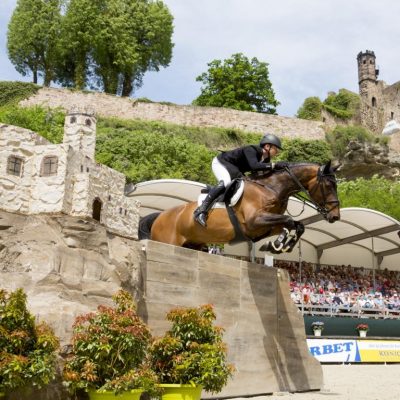 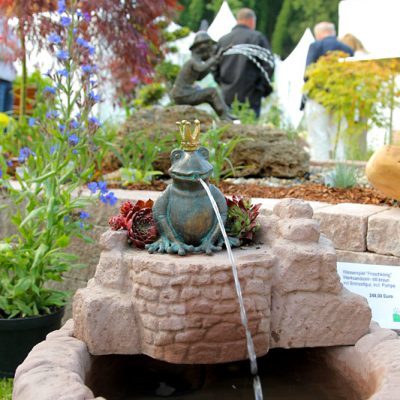 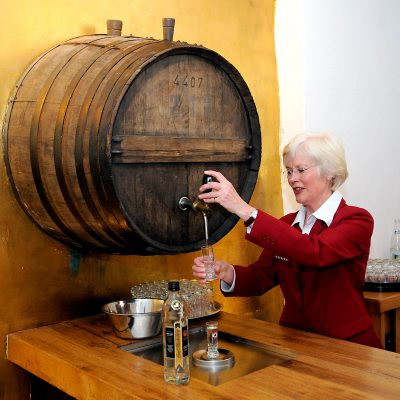 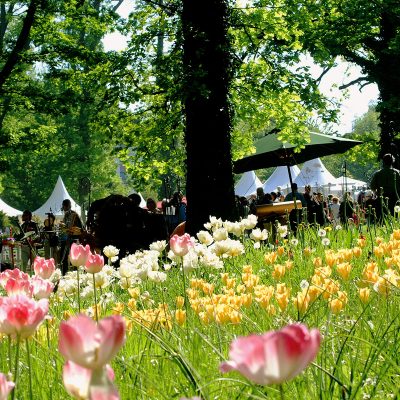 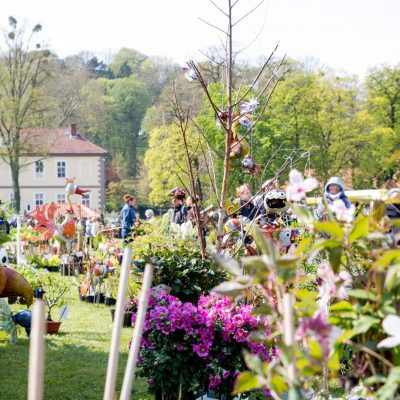 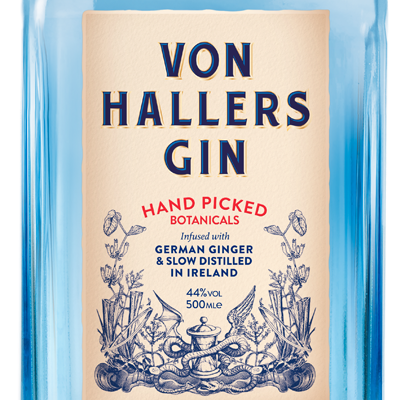 Carl u. Marie Sabine
Graf u. Gräfin v. Hardenberg
Back to overview